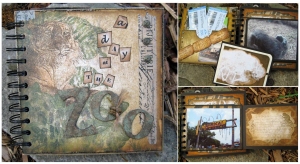 So, I’m on vacation and felt like doing something then I thought “umm, new BoBunny Zoology papers…” – need some Zoo photos! Just a few minutes later daughter calls and says she was thinking we haven’t been to the Zoo in years. Husband says how about the Toledo Zoo?

We check the weather and it says cloudy, 80 degrees with chance of rain after 5 p.m. Perfect weather for a Zoo visit. So we’re off to the Toledo Zoo! An hour and a half later we’re parking and it’s sunny and HOT! It reached 95 degrees while we were there and not a cloud in the sky – figures.

It’s been over 20 years since we visited the Toledo Zoo and I’m thankful to say their beautiful shade trees have grown big and tall. We managed to see all the exhibits that were not under construction and had a very pleasant but HOT day. Seen lots of strange-looking creatures and some cute ones too. Took lots of photos (for that new BoBunny Zoology line) and finished the mini book this weekend.

It’s full of distress techniques and I’ve even included some folded envelope pockets I found instructions for at Laura’s http://followingthepapertrail.ning.com/

There’s a pocket in front for the program and ticket stubs and I tucked in some postcards we purchased at the Zoo. It holds lots of photos – I even have room to add more!

Hope everyone enjoyed their Fourth of July weekend!

Now to get started on those cards …